Working with a LED strip on Raspberry 3

Connecting and determining the type of the strip

The following is applicable to image versions 0.14 and up. For versions 0.13 and older see an older revision of this article

Connect the +5v and GND leads of your LED to a power source and the DIN (data in) lead to GPIO18 or GPIO21 (by default). 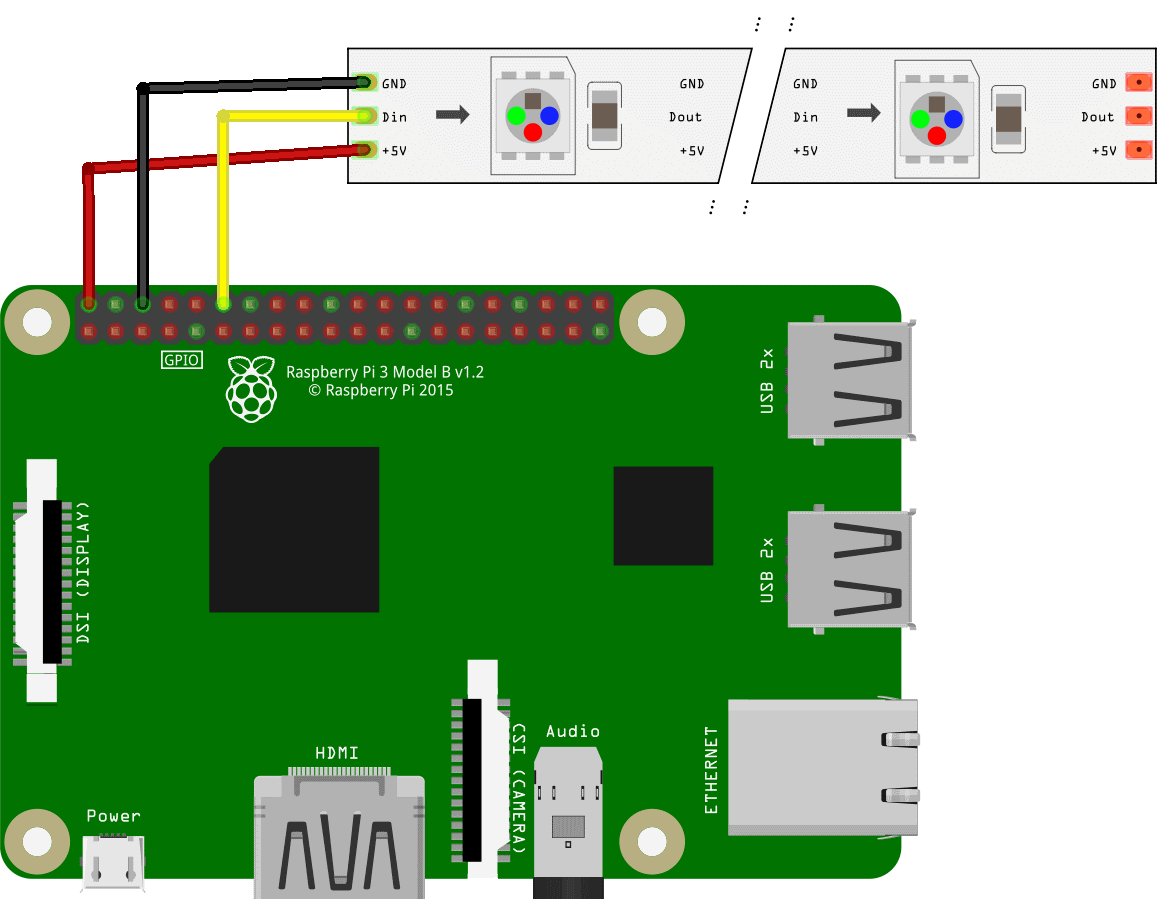 LED strip can consume a lot of power! Powering it from a Raspberry Pi may overload the computer's power circuitry. Consider using a separate BEC as a power source.

If you are using GPIO along with the LED strip, connect the strip to GPIO21. Otherwise you may experience unintended strip behavior.

LED strip library requires you to run your Python scripts with sudo. In order to make it work with ROS nodes you have to add the following lines to your /etc/sudoers file on the Raspberry Pi:

Sample program for the LED strip

The following code lights up the first 10 LEDs on the LED strip. You may use it to check whether your LED strip works correctly:

You may also want to use additional test scripts from the LED library repository.

Save the script and run it as root:

You'll need to import Adafruit_NeoPixel class and Color function into your program to interact with the LED strip. Additionally, you'll want the time module to add delays to your animations:

Instantiate the Adafruit_NeoPixel object and call its begin() method to start working with the strip:

Does it have to be this way?

The LED strip type used in the Clover kits use the following protocol: a data source (a Raspberry Pi, for example) sends a bit stream, 24 bits per LED. Each LED reads the first 24 bits from the stream and sets its color accordingly while passing the rest of the stream to the next LED. Zeroes and ones are encoded by different pulse lengths.

This LED strip is supported by the rpi_ws281x library. The library uses the DMA (direct memory access) module of the Raspberry CPU and can utilize one of the three periphery channels: PWM, PCM or SPI. This allows the library to drive the strip consistently in a multitasking environment.

Some DMA channels are reserved for system use. DMA channel 5 is used for SD card reads and writes, and setting LED_DMA to 5 will corrupt your filesystem. DMA channel 10 is considered to be safe.

You have the following options for the LED strip:

The default option is 3, because it allows the builtin audio system to work and does not require any modifications to the boot sequence.