The Clover simulation environment allows the user to test their code without any risk of equipment damage. Additionally, the virtual machine-based environment has additional (non-ROS) services that are present on a real drone, like Monkey web server.

After setting up the simulation packages or importing and running the VM, you can use roslaunch to start Gazebo simulation:

Alternatively, if you are using the VM, just double-click on the Gazebo PX4 icon on the desktop.

This will launch Gazebo server and client, the PX4 SITL binary and Clover nodes. The terminal in which the command was run will display diagnostic messages from the nodes and PX4, and will accept input for the PX4 command interpreter: 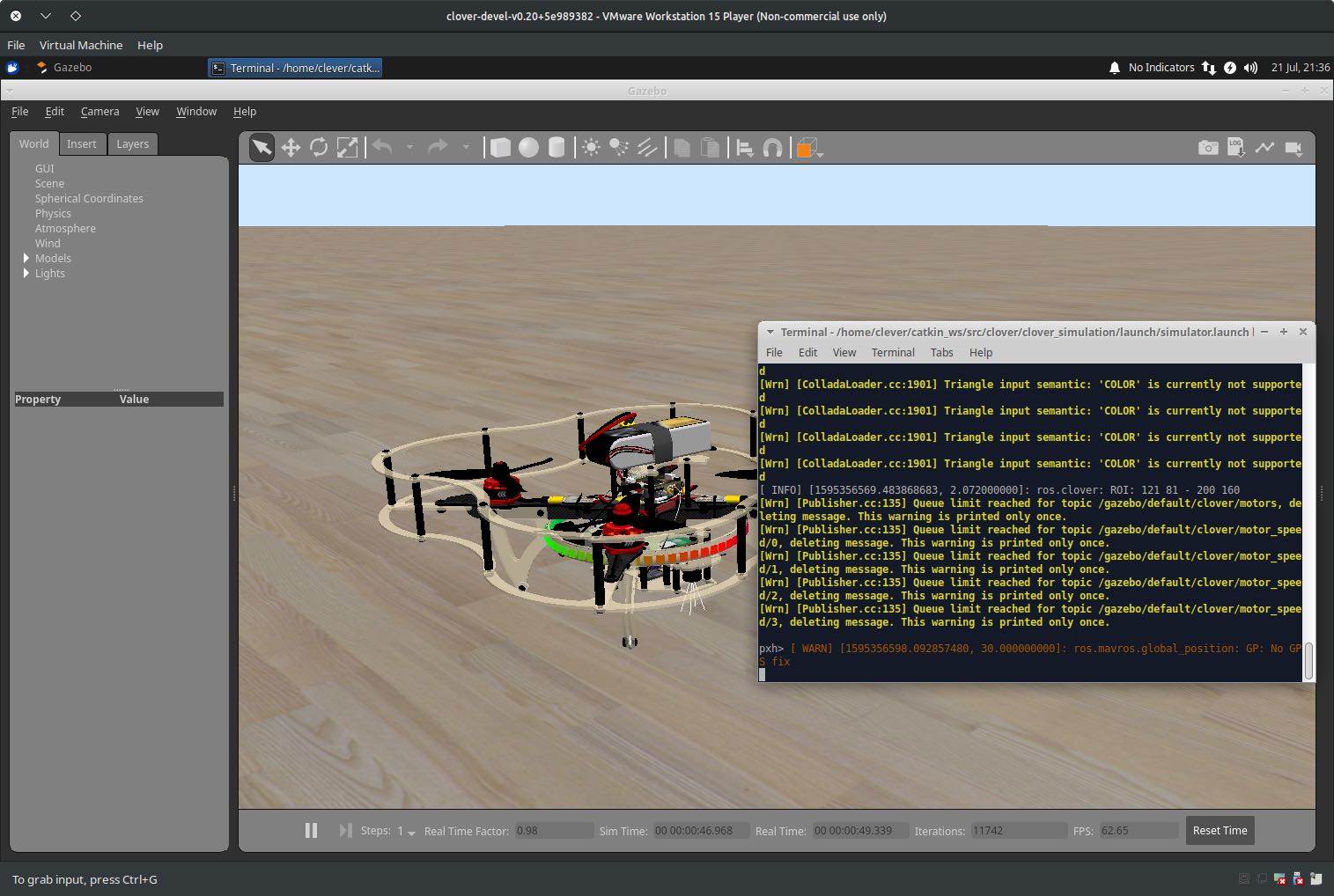 You can use QGroundControl to configure the simulated drone parameters, plan missions (if GPS is simulated) and control the drone using a joystick: 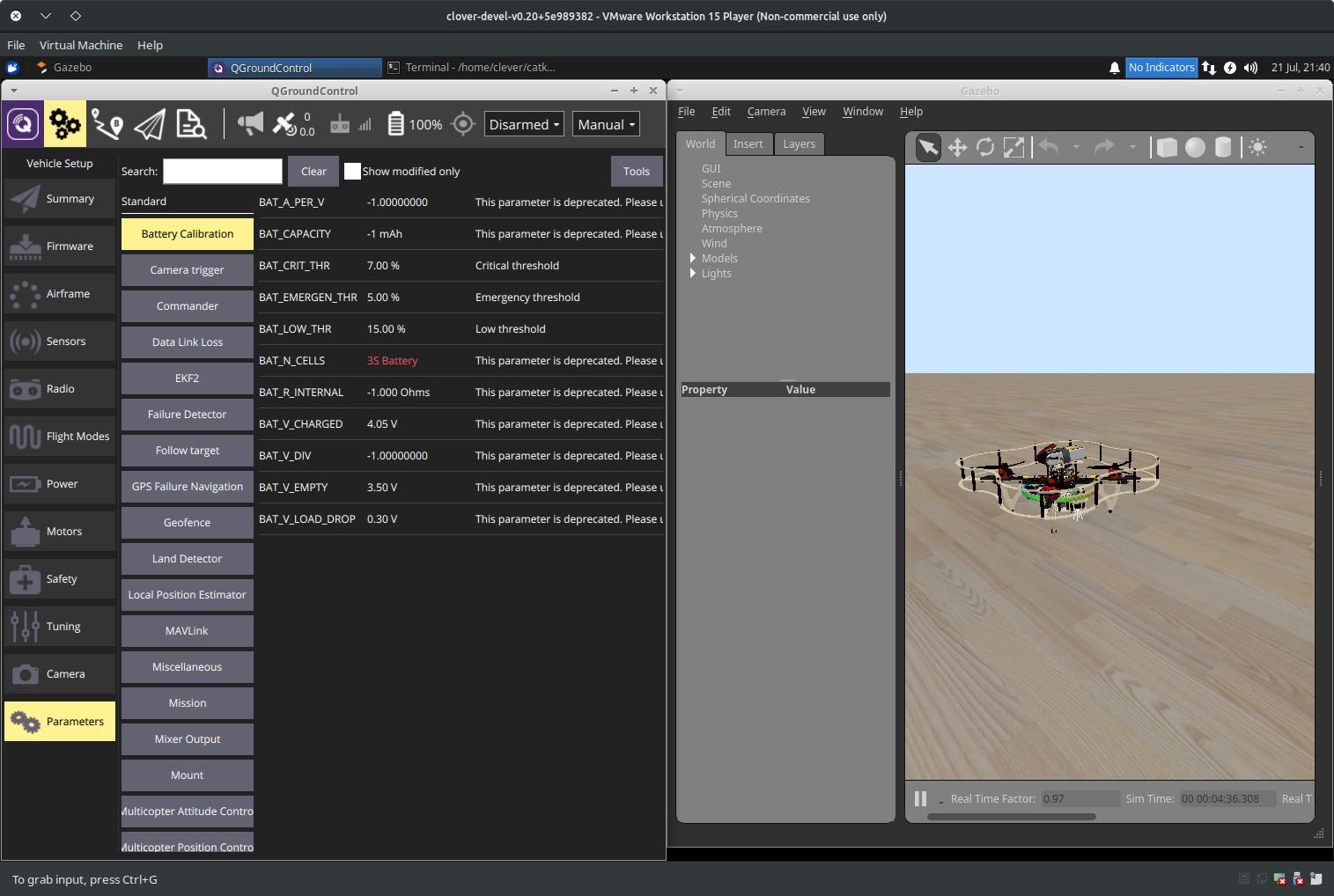 You can also use our simplified OFFBOARD control to control the drone, and traditional ROS GUI utilities like rviz and rqt to analyze the drone state: 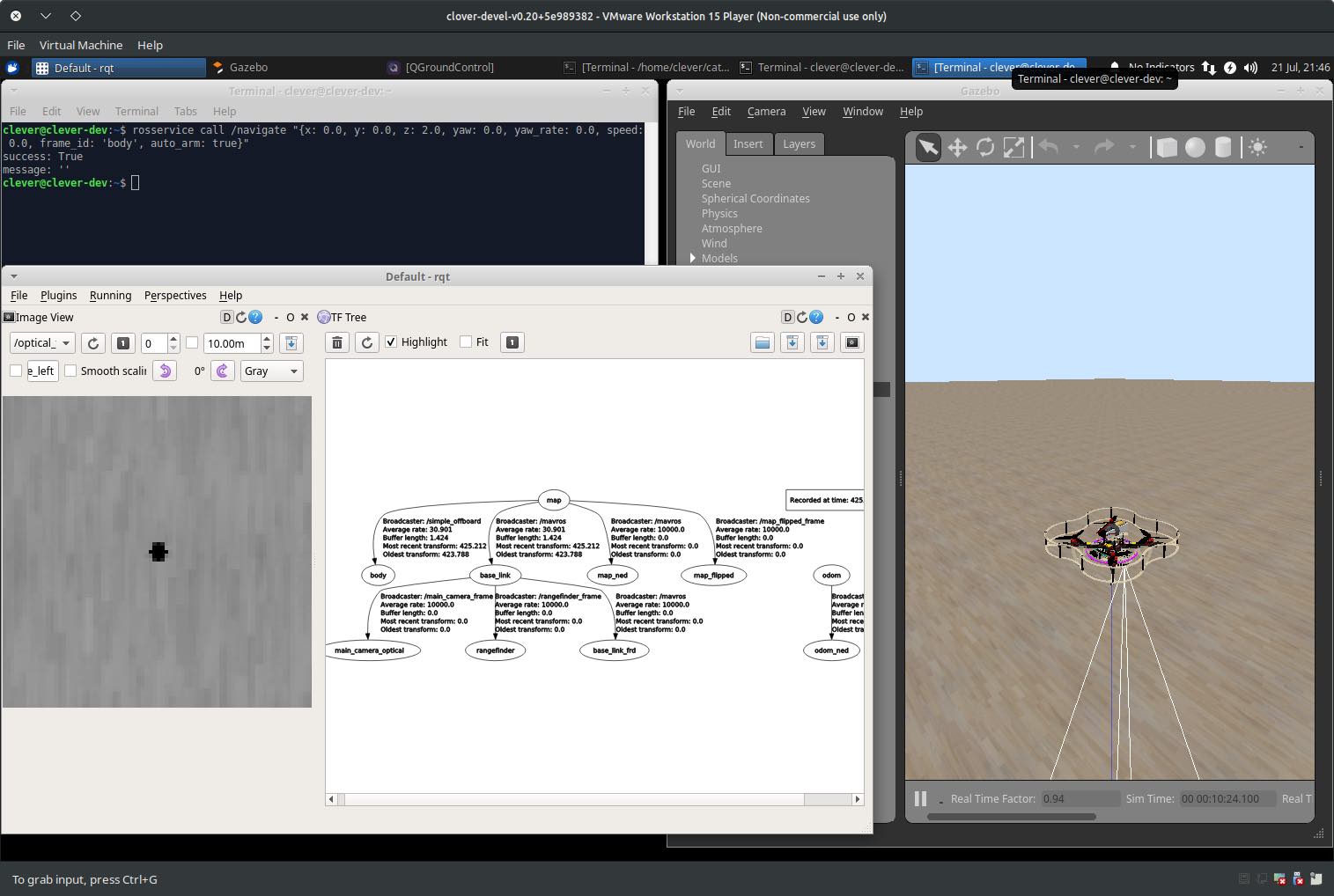 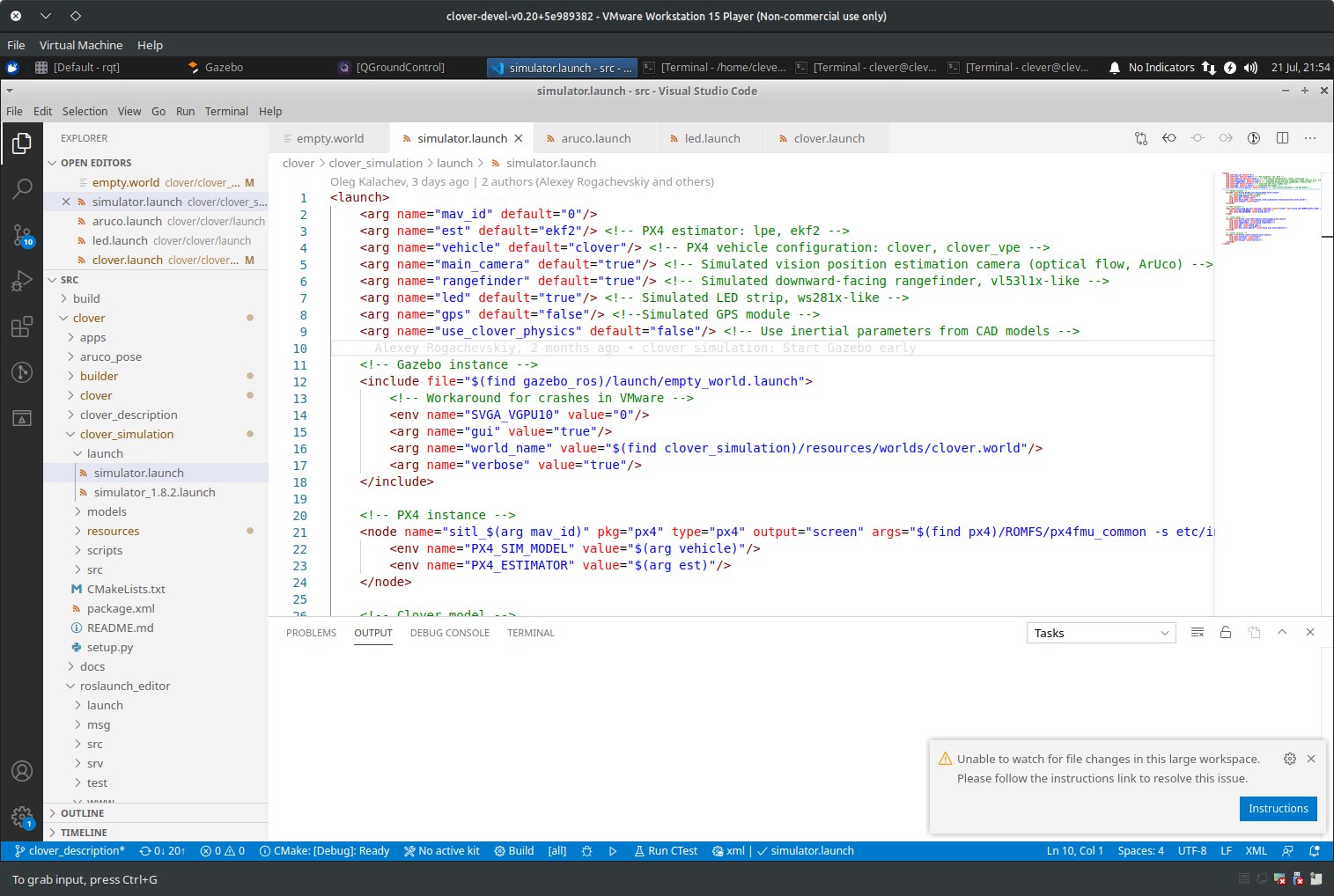 In order to enable GPS sensor, set the gps argument in simulator.launch to true:

Turn also on the use GPS flag in the EKF2_AID_MASK PX4 parameter (using QGroundControl).

If you don't need the camera when flying using GPS, it may be disabled in simulator.launch file:

Gazebo plugins for the drone currently require the real_time_update_rate world parameter to be 250, and max_step_size to be 0.004. Using other values will not work. Consider using ~/catkin_ws/src/clover/clover_simulation/resources/worlds/clover.world as a base.

Gazebo simulation environment is resource-intensive, and requires a fast CPU and a decent GPU for real-time execution. However, the simulation may still work on less powerful systems at slower-than-realtime rate. Below are some suggestions for running Gazebo on hardware that does not allow realtime execution.

By default, Gazebo does not slow simulation down for visual sensors. This can be remedied by using the throttling_camera plugin from clover_simulation.

You can enable it for the drone by changing the maintain_camera_rate argument to true in clover_description/launch/spawn_drone.launch:

The plugin will collect publishing rate statistics and slow the simulation down so that the camera publishing rate is no less than requested. However, large slowdowns may negatively affect non-ROS software that connects to PX4. If your simulation is being slowed down to values lower than 0.5 of realtime, consider using the next suggestion.

Since v1.9 the PX4 SITL setup supports setting the simulation speed by setting the PX4_SIM_SPEED_FACTOR environment variable. Its value is picked up by PX4 startup scripts, which in turn reconfigure it to expect a certain speedup/slowdown.

In this example you should set PX4_SIM_SPEED_FACTOR to 0.42 when launching the simulation:

If you are using the VM, it may be convenient to put the value in the Gazebo desktop shortcut. Right-click on the Gazebo icon, select "Properties..." and add PX4_SIM_SPEED_FACTOR=0.42 to the Command field as follows: 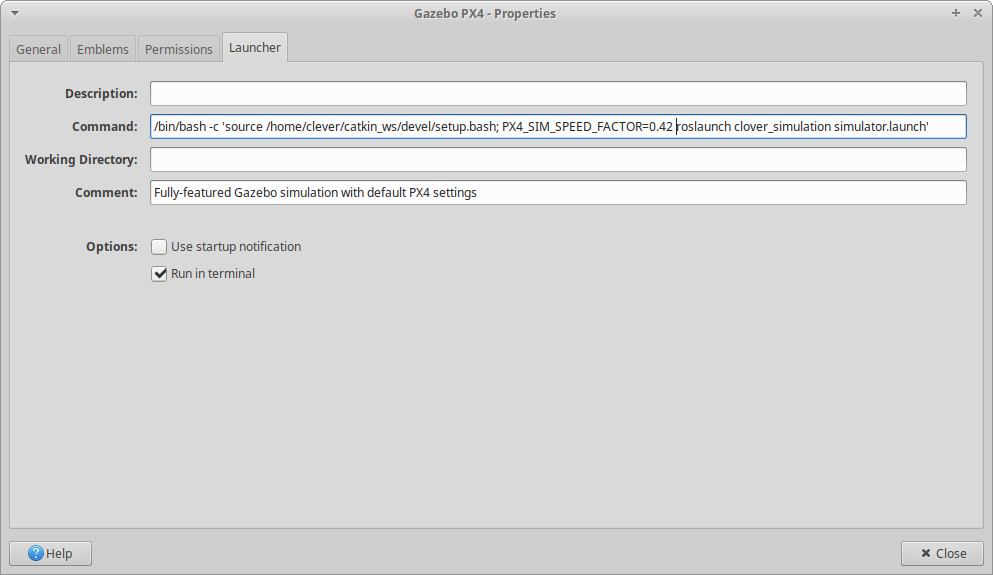 Allocate more resources to the VM

The virtual machine may benefit from several CPU cores, especially if the cores are not very performant. In our tests, a four-core machine with only a single core allocated to the VM was unable to run the simulation, with constant interface freezes and dropped ROS messages. The same machine with all four cores available to the VM was able to run the simulation at 0.25 real-time speed.

Do note that you should not allocate more resources than you have on your host hardware.

Changing the map of ArUco-markers in the simulator

In order to change the map of ArUco-markers in the simulator, you can use the following command:

In this example, map.txt is the name of markers name.